Akitas come in a wide variety of coat colors and patterns. They are one of the only breeds that allow any color or pattern under AKC guidelines. The Akita Inu is red, white, or brindle. According to standards, the red or brindle must have white or Urajiro markings on the cheeks, the chest, the belly, the tail and on the legs. They do not have a black mask.

The colors of the American Akita vary. A combination of the following 2 or 3 colors is most common:

Color is also the element that differs regarding the American Akita versus the Akita Inu. All American Akitas are patterned, except a solid white.

Remember that the color of your Akita has not to be as important as Akita’s health, temperament, and type. Finding an Akita that fits your personality is also more important than the color.

A very high percentage of Akitas need this color descriptor in addition to one of the primary colors. White markings are any markings that appear on the neck, chest, belly, legs and/or tail. Akitas have a wide range of colors as shown below. 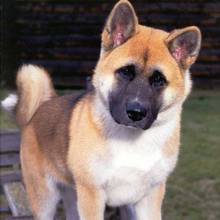 The red color is rich, brilliant and clear. A white background is on the neck, the chest, on the legs, under the belly and sometimes under the tail. White markings are well balanced. Black mask covers the area between eyes and nose, including lips. Undercoat color may differ from the outer coat. 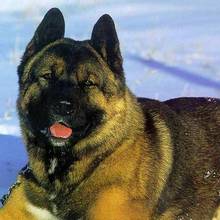 Black stripes on a fawn background. This pattern includes what are called “blue brindles” which can be quite exotic looking. The background is a pale fawn and the stripes are a pastel gray-blue. This is quite an uncommon color. 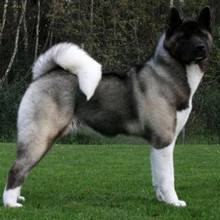 This is black striping and black edging on a silver background. The head is mostly dark-grey or even black. 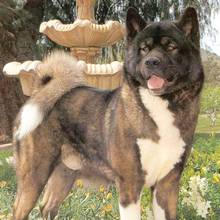 The overcoat is brown. The brown color should show a deep chocolate hue. If it is lighter, the color would be fawn. White markings are well balanced. The markings can fall anywhere, usually on the chest, stomach, back and/or front legs and tail (full or tip). 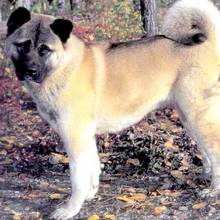 This color covers the range of hues in the tan spectrum from pale to light. Undercoat hue may differ a bit from the outer coat. 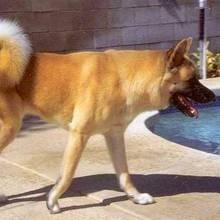 Golden stripes on a fawn background. The base coat is light fawn and their overcoat is deeper. That gives the dogs coat a golden shading. Sometimes there is a black mask. 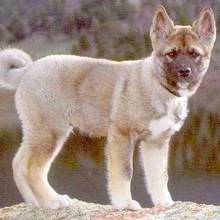 Silver stripes on a very pale fawn background are a beautiful pastel greyish blue. The head is mostly dark-grey or even black. It is very rare. 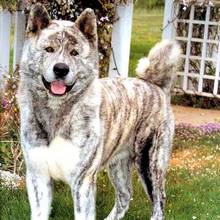 Black striping on a fawn background and white markings. 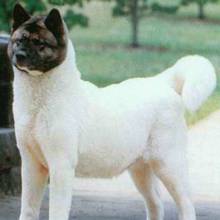 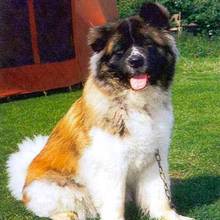 The long coat Akita is thought to be the result of breeding the Russian “Karafuto” dog with the Japanese Akita to produce a longer thicker coat to help with the harsh cold climates. This lovely dog is not “kennel club breed standard” so it can not be shown, and is therefore unlikely to be bred by registered breeders. The long coat is often described as looking like a teddy bear. Colors vary. 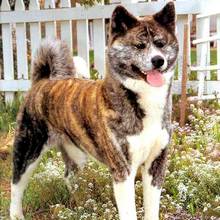 Black stripes on a red base. The red color is deep, rich reddish tint and tone. 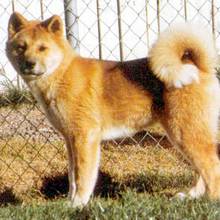 The head is the same color as the markings. The red color covers both the body and the head.

The mask is usually black and has some white which splits the face. 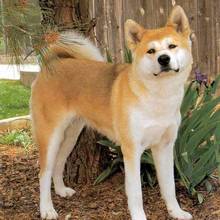 The color is deep, rich reddish tint and tone. The face and the rest of the coat are white. 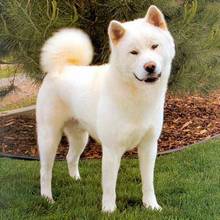 The white color is most often is mixed or may be solid. Pure with no additional is 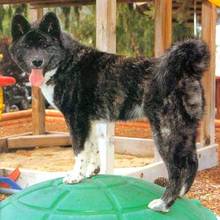 This is actually a fairly rare color. Overcoat at first glance appears to be black but on closer inspection obviously has at least a few stripes. Some black brindles can be deep black, some can be less. In most cases, there is some shading or the undercoat is a different color. In fact, most Akitas have some shading of outer or undercoat. 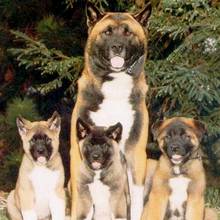 And edging or etching refers to the beautiful black pattern sometimes found on the edges of the colored portions on a pinto or marked dog. 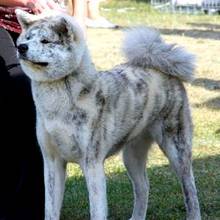 This pattern is when the undercoat is a biscuit fawn color and the stripes are a beautiful pastel greyish blue. At a first glance may be defined as a fawn brindle. It is very rare. 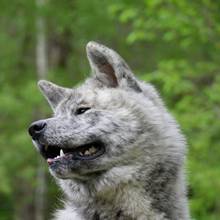 Black stripes on a silver background. The undercoat does not have any fawn hue and that is why it differs from a blue brindle.

Black stripes on a solid brown background. Sometimes the brown base can be rich and dark, thus the brown seems to be black.